What is Hydrogen Energy?

Hydrogen, a pure gas, results in the production of water vapour when burnt. Hydrogen energy is extremely flexible because it may be used as a gas or a liquid and transformed into electricity or fuel. According to statistics, around 70 million metric tons of hydrogen are already produced annually worldwide for use in processes including oil refining, steel production, chemical and fertilizer production, ammonia generation, food processing, and metallurgy. 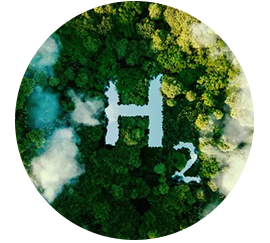 Different colours, such as grey, blue, or green, are connected to hydrogen production. The differences between these descriptions correspond to variations (differences) in the emission profiles for the various processes used to generate hydrogen.

Made → Coal (Gasification) CO2 is emitted into the environment (Most environmentally damaging).

Made →  Natural Gas (SMR) CO2 is emitted into the environment (The most common form of hydrogen).

Made → Natural Gas (SMR) CO2 is captured and stored.

Made →  Renewable sources. No CO2 is emitted.

It is a source of clean energy as it does not pollute itself. Compared with the use of fossil fuels & nuclear energy, hydropower is a much safer

It is a renewable resource of energy. As long as there is water, electricity can be generated. Water flow can be adjusted and even conserved according to the need for power.

It is the most affordable cost of power when spread out over the system’s lifetime costs. As long as there is water, electricity can be generated.

A use case for Hydrogen in Nigeria

Presently, the three key technologies used in the production of hydrogen are:

Electrolysis on the other hand produces hydrogen by using the electric current from fossil fuels or renewable energy sources to decompose water into hydrogen and oxygen. When the latter is used, it produces hydrogen without carbon emission, and it is called green hydrogen.

Send Us an Email